A people without the knowledge of their past history origin and culture is like a tree without roots. Marcus Garvey 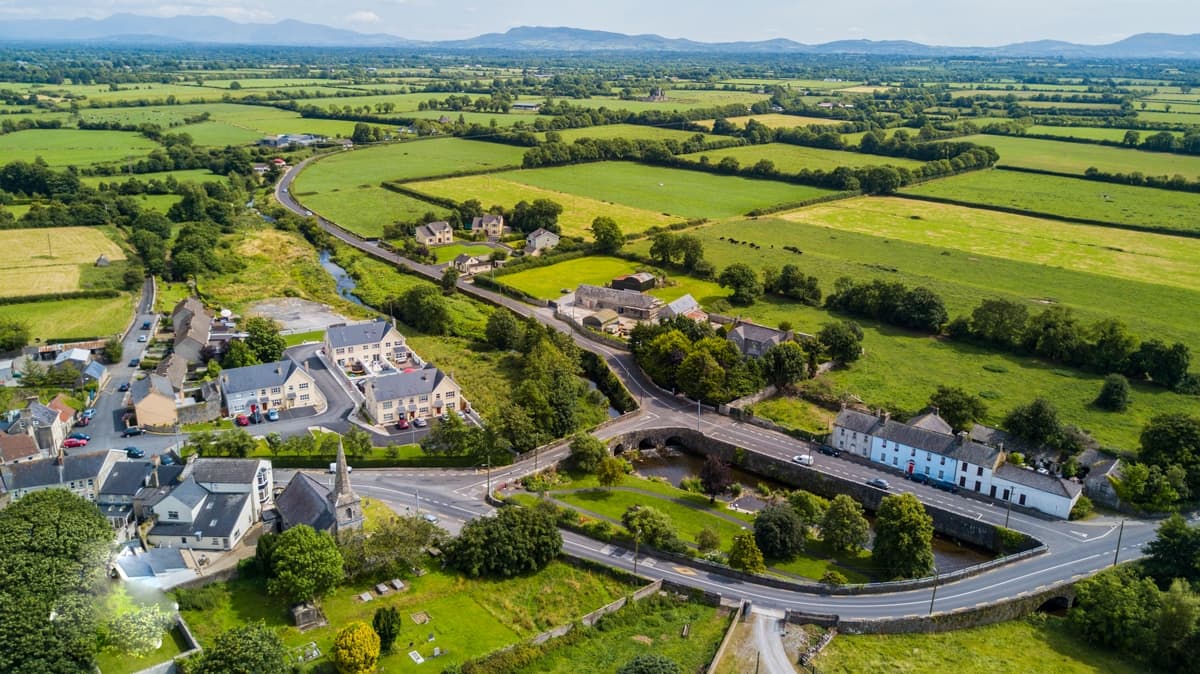 The peaceful rural town of Bruff is located in the heart of the Golden Vale of Munster in County Limerick. The town is full of fascinating historical buildings and features, and it is rich in local heritage and culture, contributing significantly to the story of Ireland.

Bruff is also famed for its contribution to the history of the United States of America, as Bruff is the ancestral home of one of America’s most famous dynasties – the Fitzgerald Kennedys.

Stay at a nineteenth-century AA 4**** historic banking townhouse The Old Bank B&B renowned for the quality of both accommodation and service and enjoy the stroll through this historic town and footsteps of Kennedys.

You can also download the free audio guide to Bruff as it leads you around this lovely town, immersing you in the history of the town and its surroundings;

If you prefer to get a guided tour of Bruff and surrounding areas, contact Guiseppe Gordano, our local tour guide for this area.

Thomas Fitzgerald who emigrated from Bruff in 1852 was great grandfather to John Fitzgerald Kennedy, 35th president of the United States.

Thomas Fitzgerald Centre (JFK) of 1926 replaced an earlier three-storey courthouse. Events occurring in the courthouse led to reforms in the legal profession which are documented by the plaque on the facade, the Plaque reads: ‘Arising Out Of Events Which Took Place in Bruff Courthouse in 1829, The Right Of The Citizen To Professional Representation In Magistrates Court Was First Established. This Plaque was unveiled by Justice Mary O’Halloran on Thursday, October 2nd 2003’.

This wonderful centre is a fitting tribute to the world-famous family. Including the Fitzgerald family tree mural, a John F. Kennedy 1963 Limerick visit photo exhibition, and an exhibition from the Caroline Kennedy visit of 2013 as well as the plaque Caroline unveiled on her visit.

The Centre has a permanent display of pictures of Caroline Kennedy’s visits and the connection of Bruff to the Family of John Fitzgerald Kennedy.

A life-size bronze statue of John F Kennedy was unveiled here in May 2019. The bible that is part of the statue is the one his great-grandfather, Thomas Fitzgerald, brought with him when he emigrated from Bruff to Boston in 1852, and it was the same one that was used by JFK when he was inaugurated as US President in January 1961. 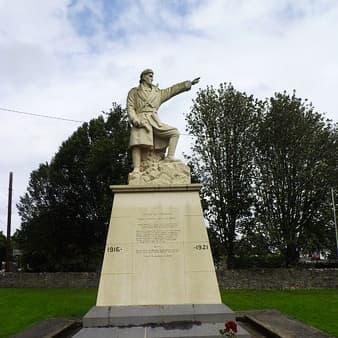 This monument commemorates Sean Wall’s role in the struggle for Irish Independence as well as the role played by members of the East Limerick Brigade of the IRA.

Sean Wall, Brigadier, East Limerick Brigade, was born in Ardykeohane, Bruff in 1888. He was killed in tragic circumstances at Anacorty on 6th May 1921.
On October 12th 1952 the President of Ireland Sean T O’Ceallaigh unveiled this memorial to Brigadier Sean Wall and the other Volunteers who fell in the War of Independence 1920 -1921.

The Original Fair Green was rectangular in shape until it was later divided into two triangles. The stone walls are a later addition. Fair Greens were places of trade, sometimes dating back to mediaeval times. They were also used for public entertainments and occasionally for military purposes.

The Community Cafe is a hive of activity and knowledge that provides refreshments and a chance to meet locals for a good chat and free wifi connection.

Bruff grove is home to An Binn Liosin, a fine Ring Fort about 70 metres in diameter. This is thought to date from around 500 AD. This fort was situated at a fording point in the river where the shallow water made it easier to cross.

This romantic and historic place was associated with the 18th-century local poet Brian O'Flaharta. While walking by the banks of the river, the beautiful fairy maiden came out of the Binnlisin and spoke to him. He was struck by her beauty and inspired by her soothing speech and with the lovely surroundings. It was here he composed the lovely poem Binn Lisheen.

The Catholic parish church, Saint Peter and Paul’s is a particularly interesting feature of the village; work on the church was begun in 1829 and was completed in 1833.

The Old Royal Irish Constabulary Barracks (1870) on Main Street is preserved as a listed building. 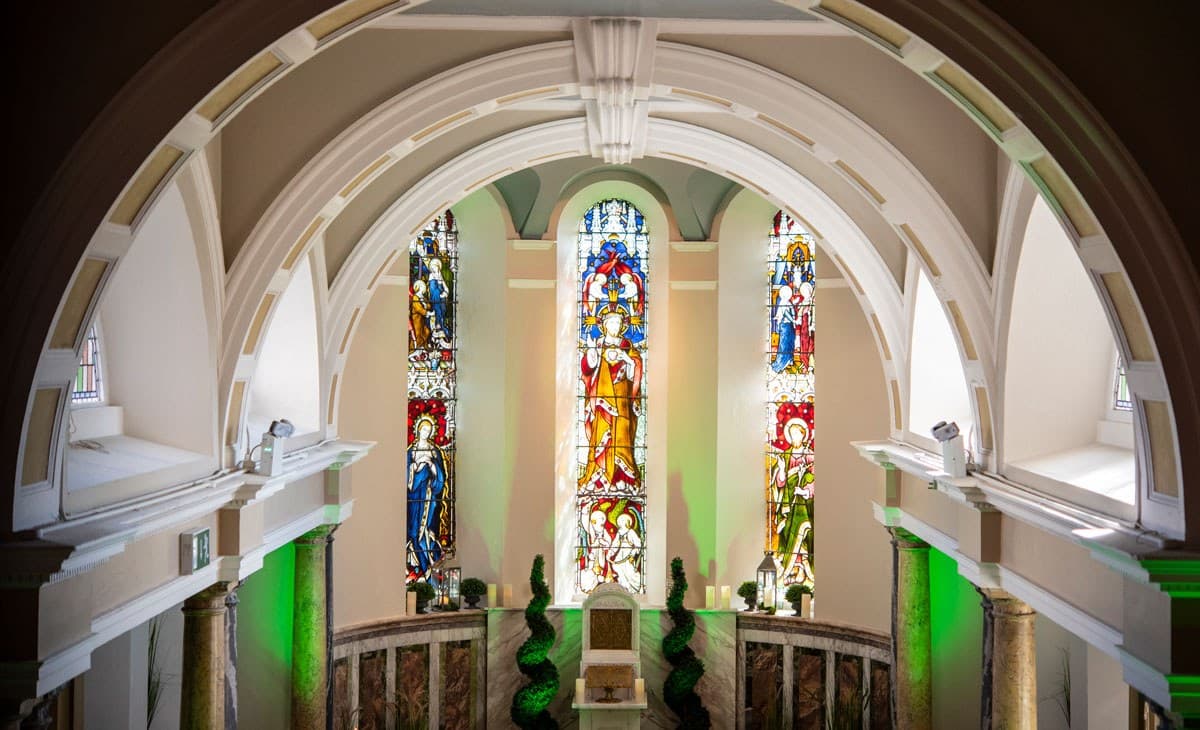 The Kennedy Rooms has it all, the unique location, the incredible history, the amazing architecture, the political connections, the surrounding area and the people set up an once in a lifetime opportunity to create something unique and special.

It is formally the home of the FCJ Convent School in Bruff. The F.C.J. (Faithful Companions of Jesus) Sisters came to Bruff in 1856, following an invitation from Dean Cussen. The six F.C.J. sisters set up a girls’ primary and secondary school (Ard Scoil Mhuire). Up until its closure in June 2012, over 200 Sisters had worked in the secondary school. The current convent is a very impressive building, with spectacular Architectural and Decorative features.

The first non-alcoholic bar in Ireland - The Nuns Room - is situated in The Kenedy Rooms ...a really nice place to meet, chat, sing a few songs, have a nice bite to eat and just relax to unwind the stresses of a busy day. Open every Friday evening from 6pm. 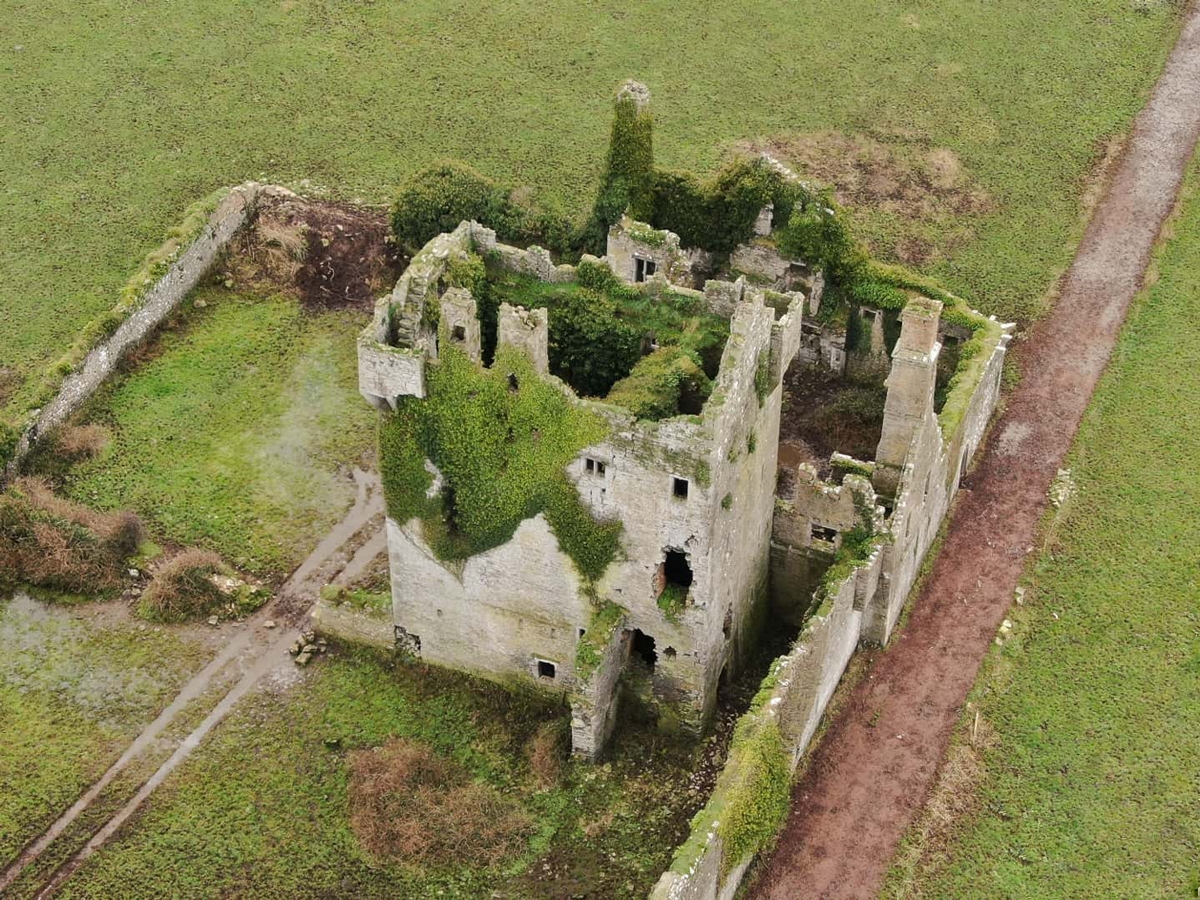 The castle is described by Westropp as a late 16th-century house, with extensive outbuilding and a court with an outer gate. It was mentioned in 1583 when apart was held by W. ffoxe and that it had been held by Gerald, Earl of Kildare and his ancestors.

Ballygrennan castle is classified as a tower house. This is a type of smaller square or rectangular castle up to 4 or 5 storeys with a base batter and usually with battlements of stepped merlons and machicolations. Tower houses were surrounded by defended enclosures or farmyard known as bans. There are two bawns at Ballygrennan, and they may have contained stables on the ground floor with accommodation above.

Castle is not accessible to the public, but it can be viewed from the roadside. 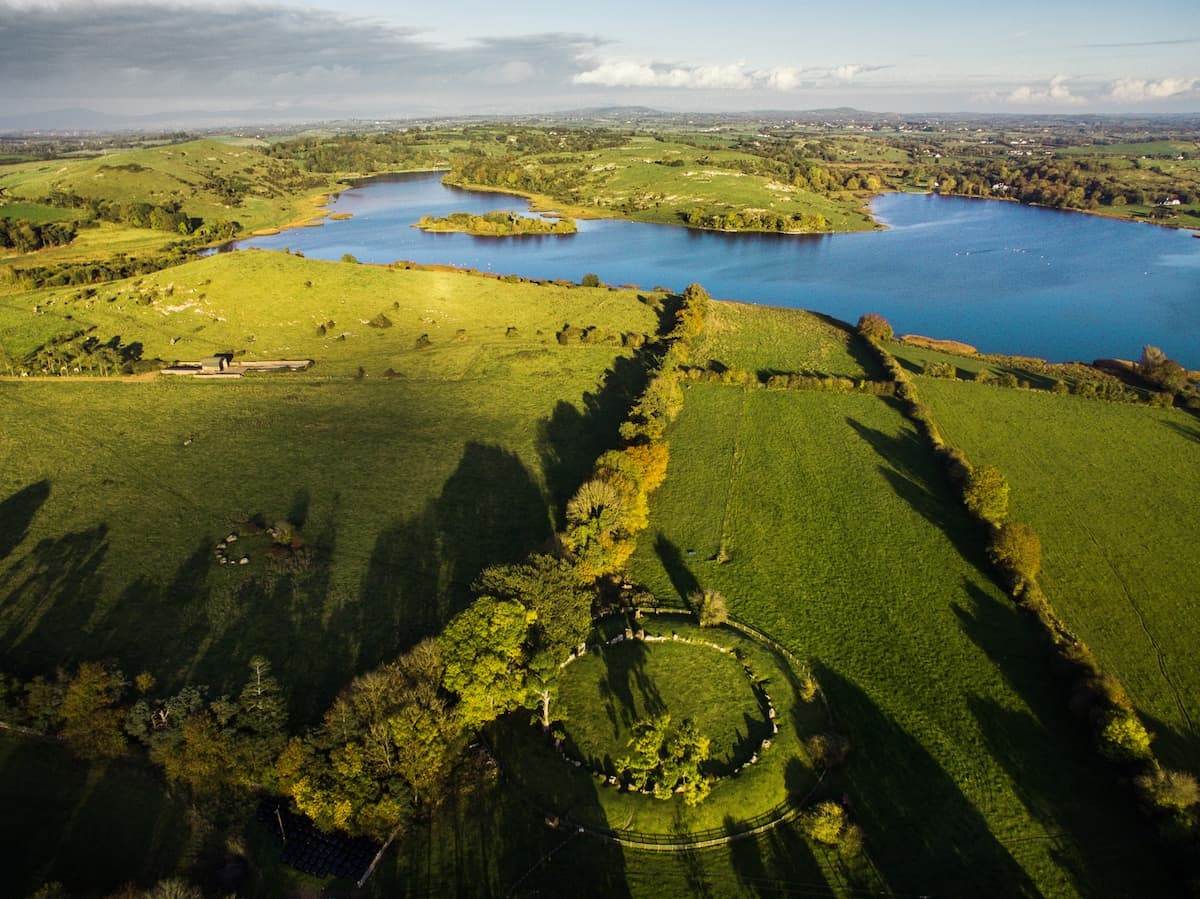 To the north of Bruff is Lough Gur, a horseshoe-shaped lake bounded on three sides by hills. Bronze Age objects found in and near the lake have made it the most important Bronze Age site in Ireland. Every major museum in the world has at least one artefact from the lake. In the 1840s and ‘50s, the archaeology of the Lough Gur area was damaged by treasure hunters and as a result, many artefacts were lost.

Lough Gur is a haven for swans, ducks, and wildfowl, and has an interesting variety of wild animals. Its visitor centre is open during the summer months.

Grange stone circle is also known as Lios na Grainsi (Irish for "stones of the sun"). Grange is Irelands largest stone circle, consisting of 113 stones. Built ca 2100 BC it is over 150 feet in diameter. A post hole found in the very centre of the enclosure indicates that the circle was measured out from the central point and is the reason for its near-perfect shape. It is surrounded by an earthen bank which in places id three to four feet high and makes it look more like a form of henge monument than a conventional stone circle. Aligned with the rising sun on the day of the summer solstice the sun shines directly in the centre of the circle. It is a must-see attraction when visiting Bruff. 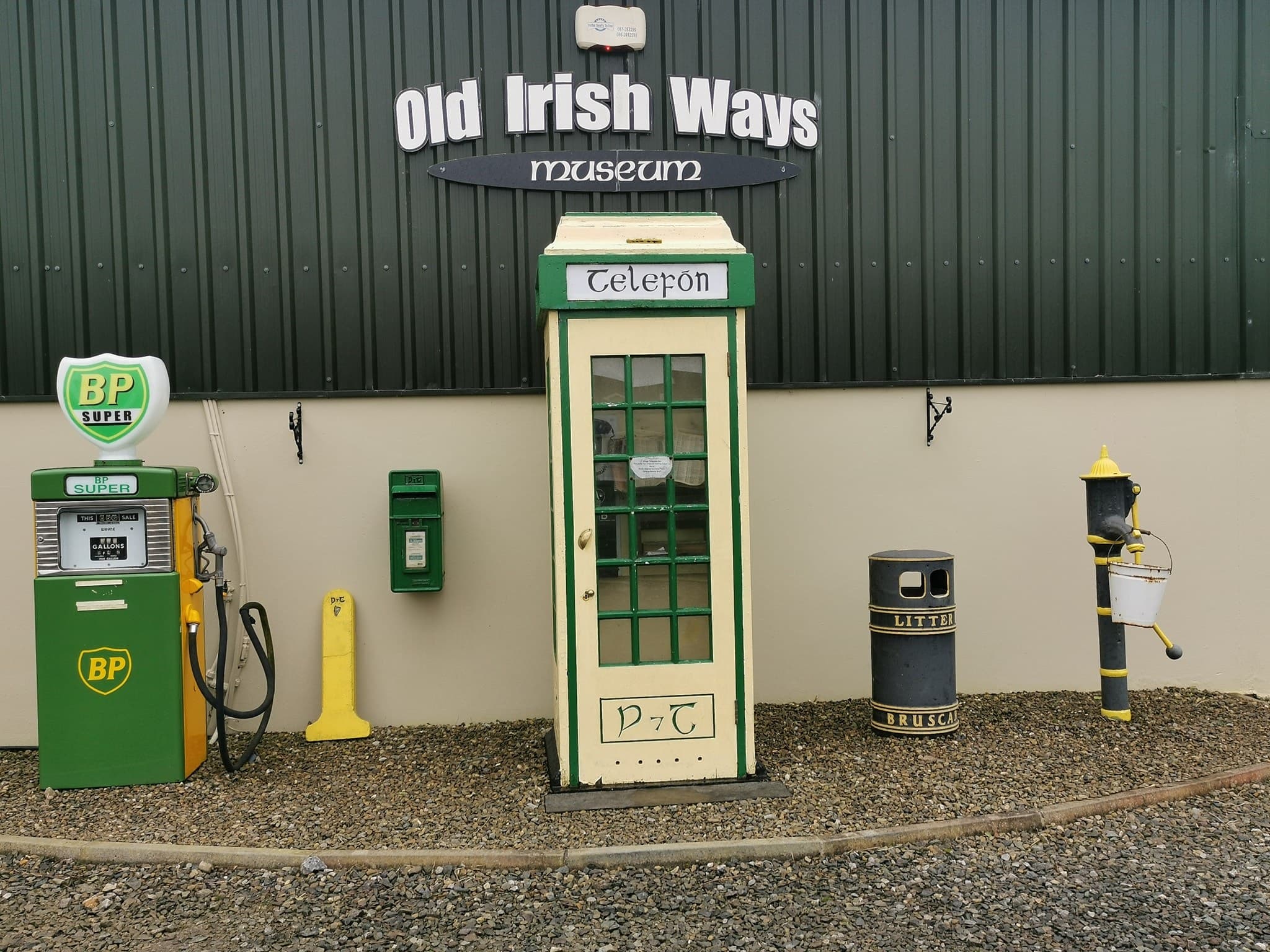 Do you want to explore an impressive collection of antique, historical and novel items dating from Pre-Famine times to more nostalgic items from our more recent past?

Denis from Old Irish Ways has it all!!

​When you take a step through the doors of Old Irish Ways you take a step back through various artefacts and collectables which were used as part of everyday life down through the years in an Ireland long past. From the kitchen to the farmyard the collection built up by Denis over a number of years represents an Ireland of bygone days. The unique displays include an old pub, an old kitchen, an Irish creamery, an old classroom, forge, workshop, a must-see famine pot and many more. 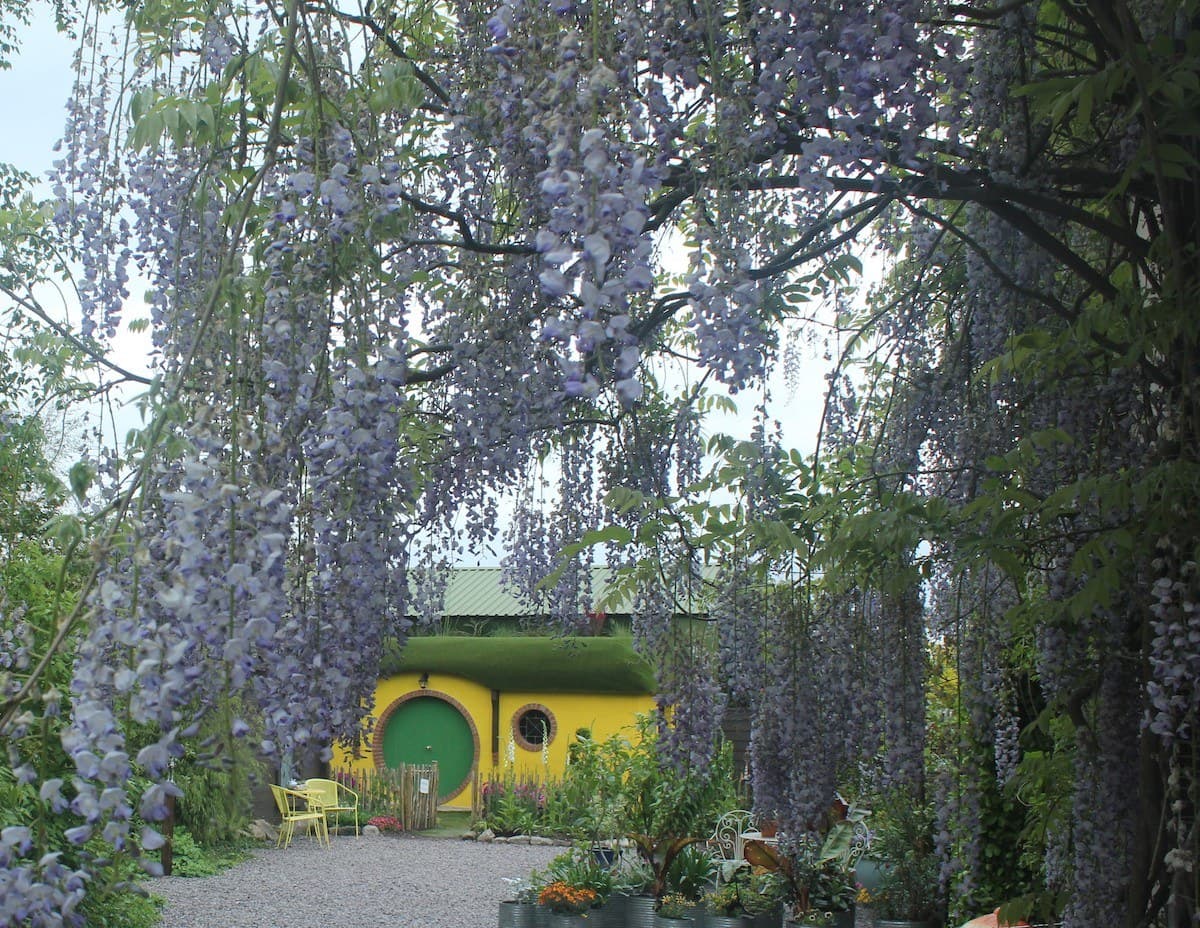 Ahern Nurseries & Plant Centre at Sherin's Cross is a veritable paradise for any plants person. Wander around our growing tunnels bursting with flowers, lose yourself amongst the outdoor herbaceous beds and let your senses be tickled by the sounds and scents of our busy plant centre.

Terra Nova Gardens is a dynamic space full of the unexpected. Home to an exotic Thai House with tropical plantings, a magical woodland where pixies, fairies and other elementals live in shady places, sensational seasonal planting throughout the garden, a Hobbit Tea House based on Bilbo’s Bag End and Ireland’s Largest Fairy Gift Shop.

Rockbarton Garden centre is an award-winning garden centre that first opened in October 2015. Rockbarton is located in a unique and beautiful 18th Century courtyard, which provides fantastic olde world charm. 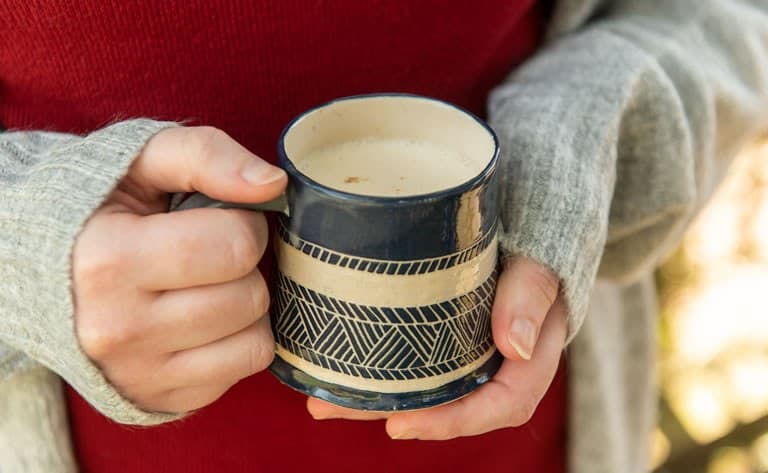 Her handcrafted pottery pieces are all unique and an amazing gift for someone special. Clair also runs pottery courses for adults, kids camps & workshop and also takes private group bookings.

Bruff is also home of local artist Ethne Hehir of Ballyhoura Ceramics who creates functional and aesthetic porcelain vessels. All the pieces are lovingly hand made by using the traditional handcrafted method of throwing on the wheel creating a unique piece of porcelain.

Ethne's studio opens by appointment and classes are available on request.

If you are looking for accommodation for your travels around Bruff and the surrounding area, please take a look at the 4 star The Old Bank, Bed and Breakfast, where accommodation ranges from jacuzzi ensuite rooms to four-poster bedrooms.

If you are looking for a hotel-style of accommodation, family-run Deebert House Hotel in Kilmallock is only 15min drive away and it takes only extra 5min to get to four-star Charleville Park Hotel.

If you are looking for some much-needed nourishment, look no further than the Clancys Bar & Restaurant situated directly in town or friendly The Yarn Cafe which offers a breakfast and lunch menu including salads, sandwiches, mains & sides all made fresh to order. If you are heading towards Rockbarton Garden Centre stop at Reardon's Bar & Restaurant at Holycross on the main R512. 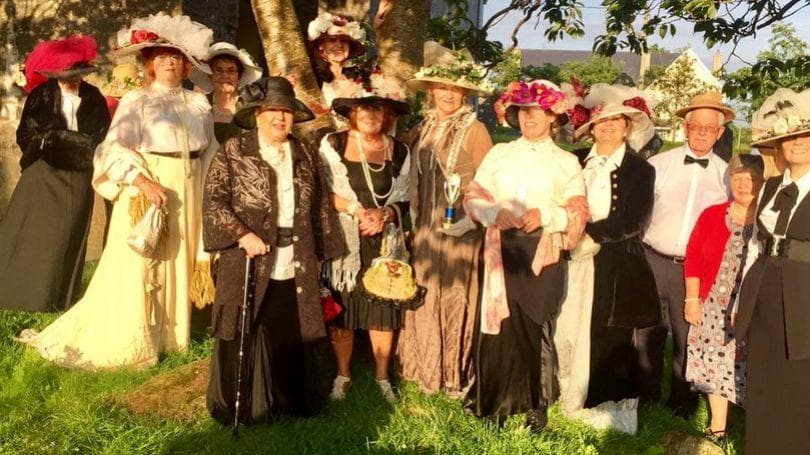 An annual Bloomsday festival in Bruff will take place on Tuesday 16th June 2020 with an exciting line-up of events and activities to delight all Joycean fans.

In September the community of Bruff is coming together to celebrate the birthday and life of one of their own and one of the worlds greatest female artists: Dolores O’Riordan.

Dolores, who tragically passed away in January of 2018, was the lead singer with The Cranberries, a band who rose to international success in the early ’90s, selling over 40 million albums worldwide. Dolores was a prolific songwriter and also enjoyed a hugely successful solo career in the early 2000’s.

Second-year of the annual Dreams Festival, which is taking place on September 5, 6 and 7 will showcase an eclectic mix of exciting artists. With a focus on original music, the festival will also host talks, community music gatherings, comedy, cabaret and spoken word acts.

In celebrating our American Connections the “4th of July” BBQ is not to be missed.

St Patrick’s Day March 17th is always full of colour and represents the town's clubs and societies. Bruff Bluegrass festival is becoming a regular on the calendar of events.

In This Day Out 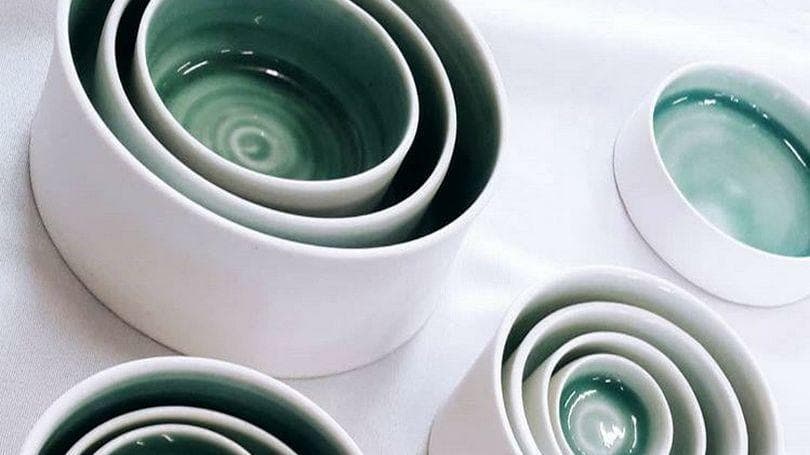