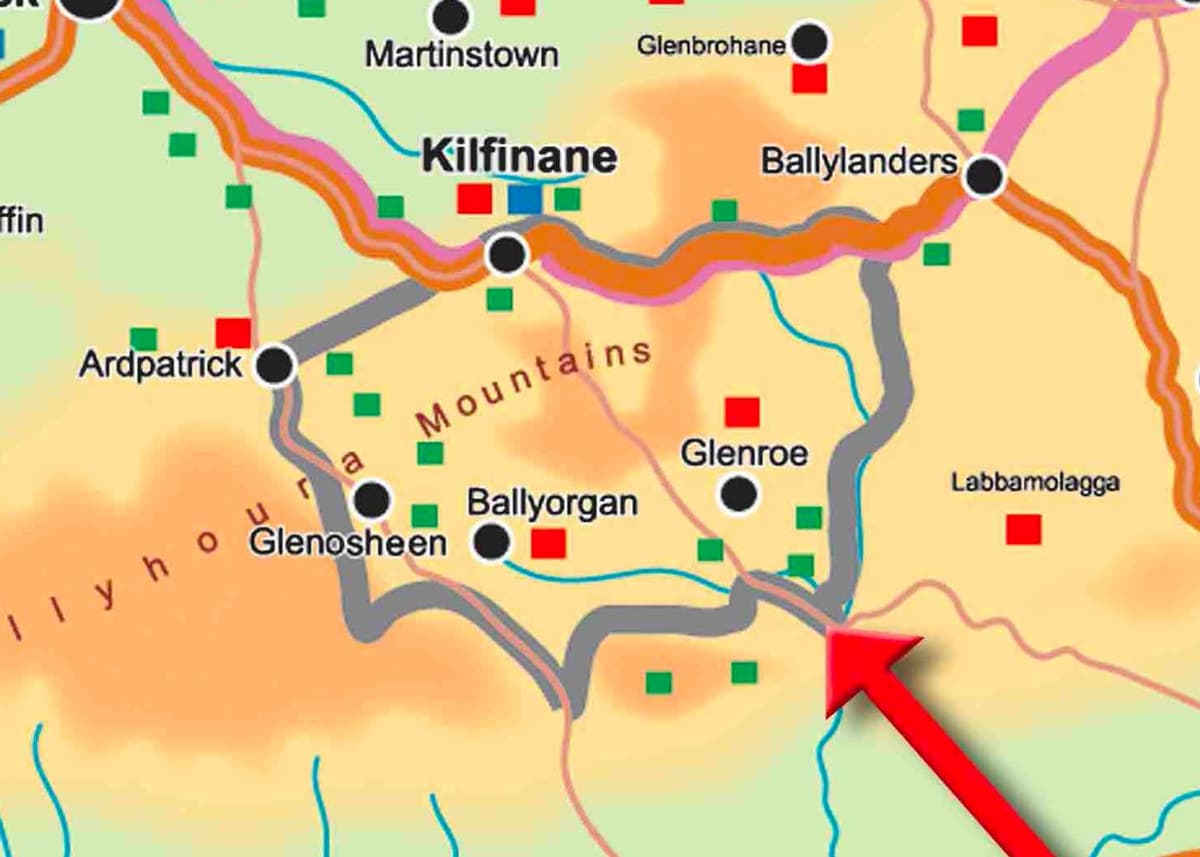 Gentle, winding roads cut through this scenic terrain that’s dotted with wonderful archaeological, mythological and historical sights. Amongst the rolling countryside you’ll be tempted to stop-off at the pretty villages, make time for a way-marked loop walk, amble down a nature trail or try your luck at bird watching. The signposted drive takes you through Kilfinane, Ardpatrick, Glenosheen, Ballyorgan and Ballylanders. 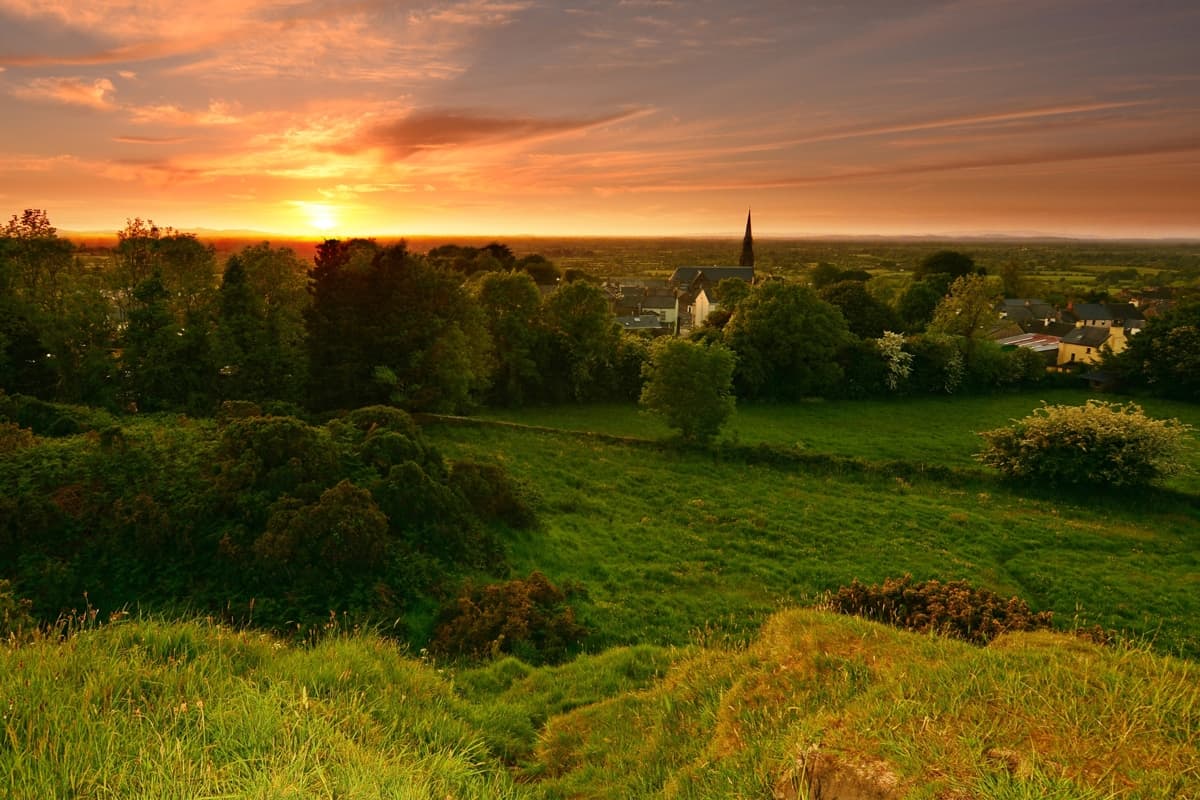 Why it’s so special?

Nature lovers may want to drive this route in reverse after its completed, such is the abundance of beauty to enjoy! The village of Kilfinane, the highest in Limerick, is surrounded by the Ballyhoura Mountains on its south, east and western sides and owes much of its present layout to the Oliver family.

They acquired 6,500 hectares of land here in the 1650s when the Fitzharris family, who had owned the land since the 13th century, disposed of it during the Cromwell invasion. The Oliver’s kept the land for 300 years, during which time they commanded a local military force, held seats in parliament, acted as magistrates and created a handsome planned town that still thrives today.

The small village of Ardpatrick, a few miles south of Kilfinane, lies beneath the slopes of the Ballyhoura Mountains. According to local legend, St Patrick established a church on the hillside here in the fifth century, thus giving the village its name.

For breathtaking views of the countryside, brave the steep climb to the ancient ruins, which only date back to the Middle Ages. Centuries on, it’s still easy to see why this promontory was such a serene choice for a place of worship. 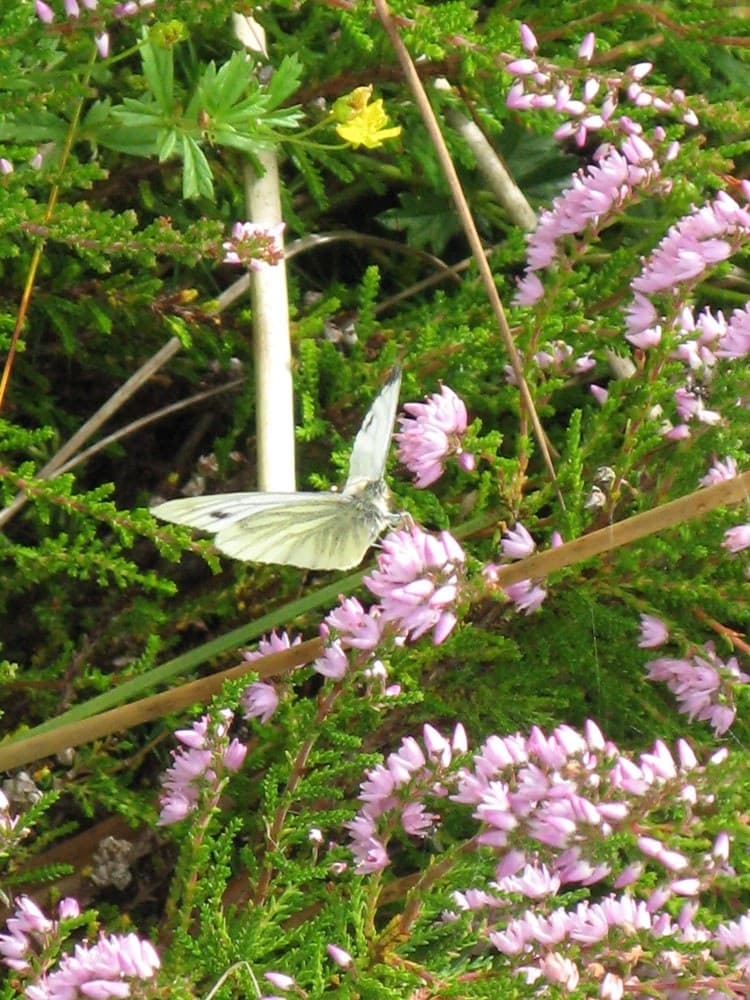 Don’t be confused by the many winged creatures you’ll spot on your drive through this area. Pick up a copy of the Birds & Butterflies booklet at the Ballyhoura Office in Kilfinane and you’ll have a head start identifying Slí Finn’s abundant flora and fauna.

The Ballyhoura Nature Trail, located at the Ballyhoura Mountain Trail Centre is a 40 minute 5km investigation of over 20 hidden creatures in the woods that kiddies have to uncover on their walk.

The start point of the trail is just located from the car park and is a wonderful way for children to investigate the many creatures that live in the forest.

Culture vultures, especially those with a keen interest in Irish traditions and folklore, should pencil in a visit to Glenosheen, at the foot of Seefin, the highest peak in the Ballyhoura Mountains.

It was home of the Joyce Brothers, who made an outstanding contribution to Irish scholarship, through both the written and sung word. Patrick Weston Joyce (1827-1914) was a celebrated music collector, historian and scholar, who, despite very humble beginnings, graduated with a Master of Arts from Trinity College, Dublin, in 1864. He undertook extraordinary work to protect and record Irish culture, with The Origin and History of Irish Names and Places the best known of his 20 published books.

Patrick’s brother, Robert Dwyer Joyce (1830-1883), was a physician, poet and Fenian who penned the enduring ballad of The Wind that Shakes the Barley. After graduating from Queen’s College, Cork, in 1857, he became Professor of English at the Catholic University, Maynooth, before moving to Boston in 1866 where he practised medicine and became a lecturer at Harvard medical school. While in America he published several collections of Irish music and poetry and returned to die in Ireland in 1883. Today, a plaque is on display in Glenosheen, to mark their birthplace.

Joyce Brothers Music Festival which celebrates the life, times and works of Joyce Brothers, takes place every year in the town of Kilfinane, Co. Limerick. 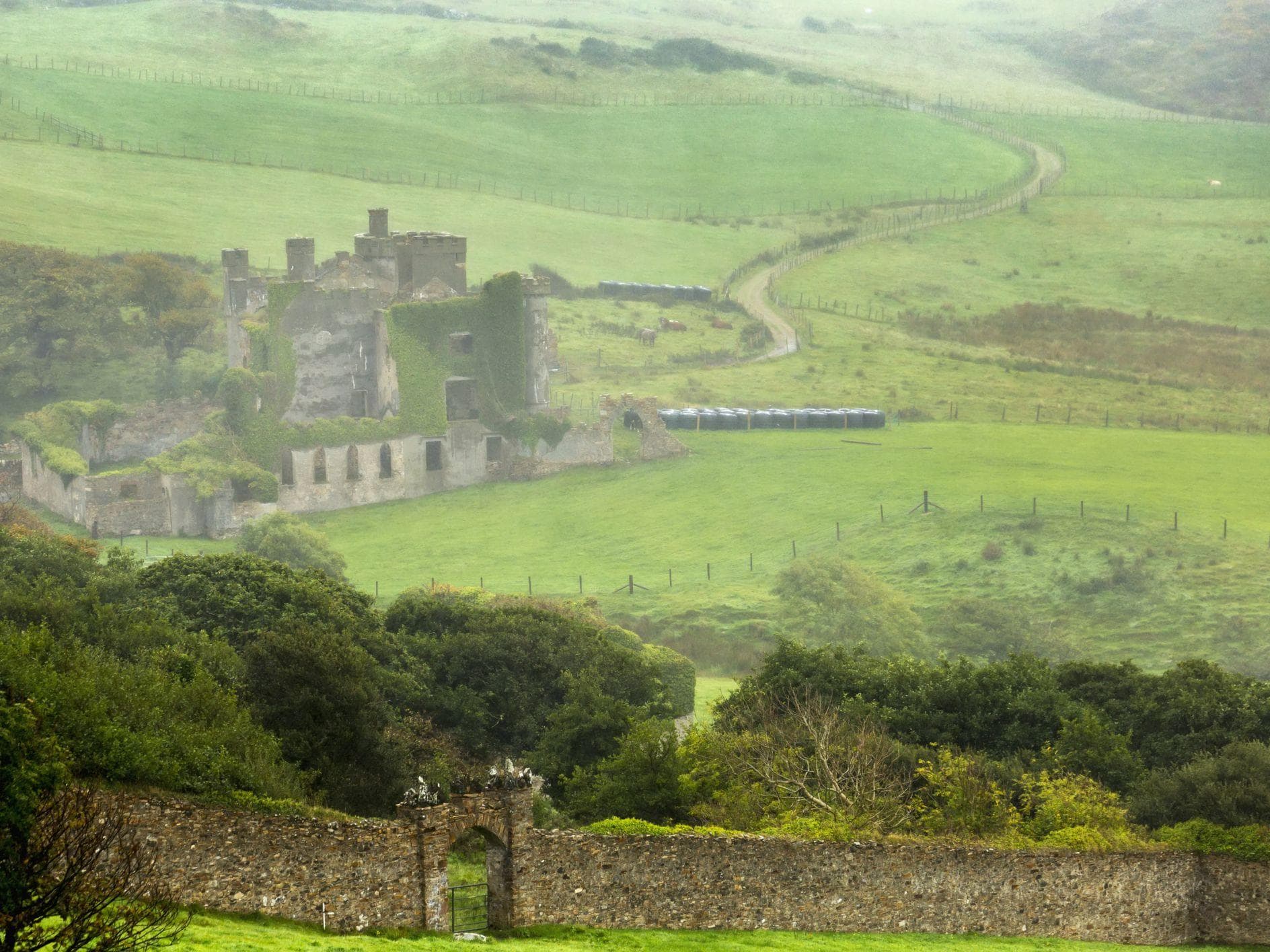 Long before the Joyce brothers put Glenosheen on the map it had secured a place in Irish folklore.

The popular mythological Irish legend Tír na nÓg (Land of Eternal Youth) is, in fact, where Glenosheen gets its name. According to legend, the Fianna hero, Oisín, was out hunting when he met the beautiful Niamh of the Golden Hair, who was riding a white horse. She told him she loved him and invited him to join her in Tír na nÓg. Travelling west with her, he arrived in Tír na nÓg where they both began 300 years of lovemaking, with Oisín never experiencing sickness, age or frailty. However, not a day passed when he did not think of returning to Ireland and his family and home.

Eventually, Niamh reluctantly allowed Oisín to return but she warned him not to dismount from his horse or he would become old, withered and blind. Upon returning to Ireland, to his great sadness, the good old days of 300 years earlier had gone and all his friends were long dead. At Glenosheen (The Glen of Oisín), he leaned from his horse to help men lift a stone into a wagon. As he did so, his reins broke and he fell to the ground. Oisín immediately transformed into an old man. As luck might have it, Saint Patrick happened to arrive on the scene and had barely enough time to baptise Oisín a Christian before he died. 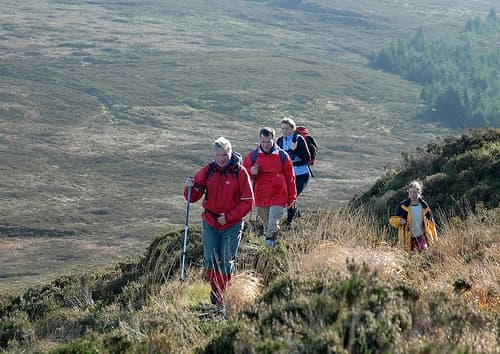 If walking is your thing, don’t miss the International Ballyhoura Walking Festival held on the May Bank Holiday weekend. Starting in Kilfinane the weekend caters for walkers of all abilities, and makes a great weekend for all the family.

If walking isn’t hardcore enough, check out the Coillte Biking Blitz or 2NDURO Mountain Bike Event held annually at Ballyhoura Mountain Bike Trails. These adventure races are suitable for all ages and abilities and will push you to your limits as you orienteer through forests and mountains, abseil down waterfalls, run through valleys, bike through forest and kayak through rivers. 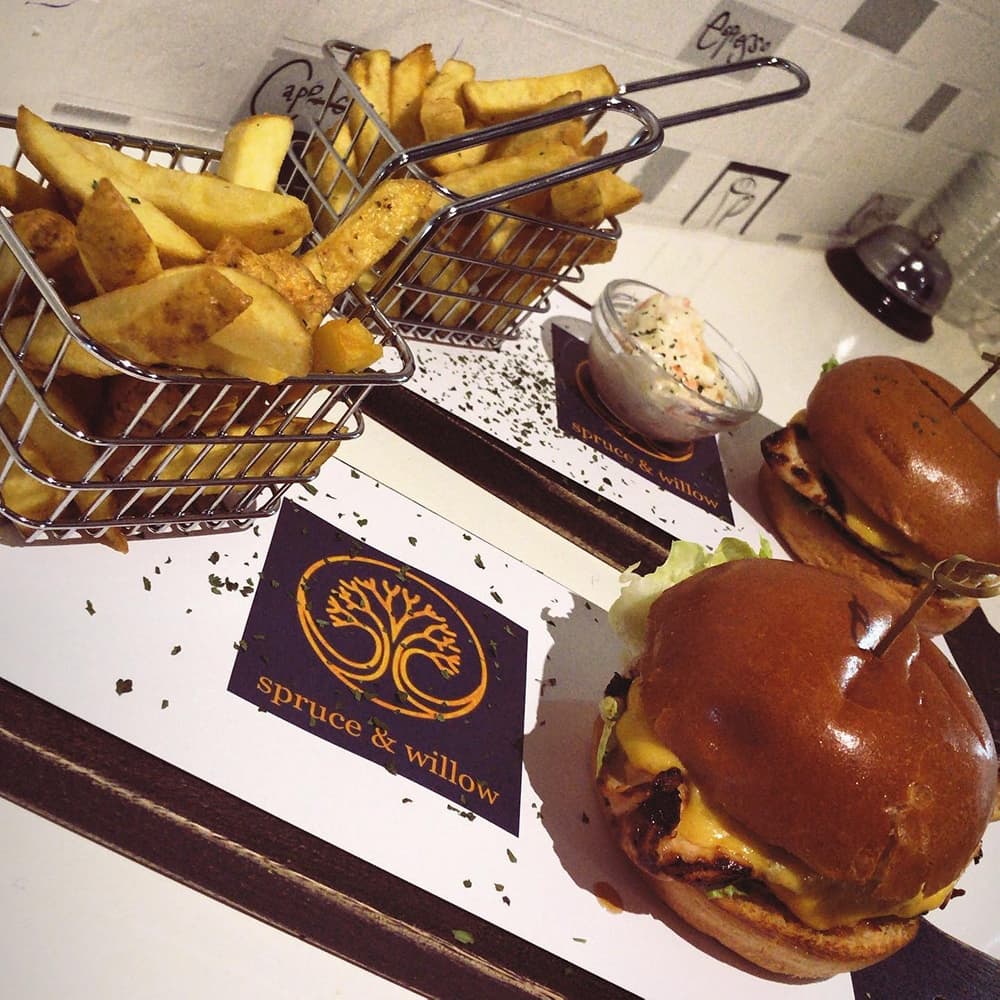 Weary walker? Tired traveller? Chilled out cyclist? Whatever your want, you’ll need good food and refreshments along the way. Thankfully the Slí Finn route has plenty of choice for quick energy boosts, long lingering lunches and evening meals. Enjoy an evening in any of the traditional country pubs along this route, and experience the warmth and friendliness of the locals.

In Ballylanders, at the end of your drive, you’ll find Gallahue’s Bar and Restaurant, serving decent pub grub and good pints! Greenwood Inn in Ardpatrick is known for its eclectic evening entertainment, including music and talent shows. They also run Irish dancing classes here on Monday nights, with newcomers welcome to try their hand… ahem, foot… at traditional set dancing!

Next to the Greenwood Inn is newly opened Spruce & Willow Cafe with delicious breakfast and lunch menu. Outside seating during the good weather is also available. 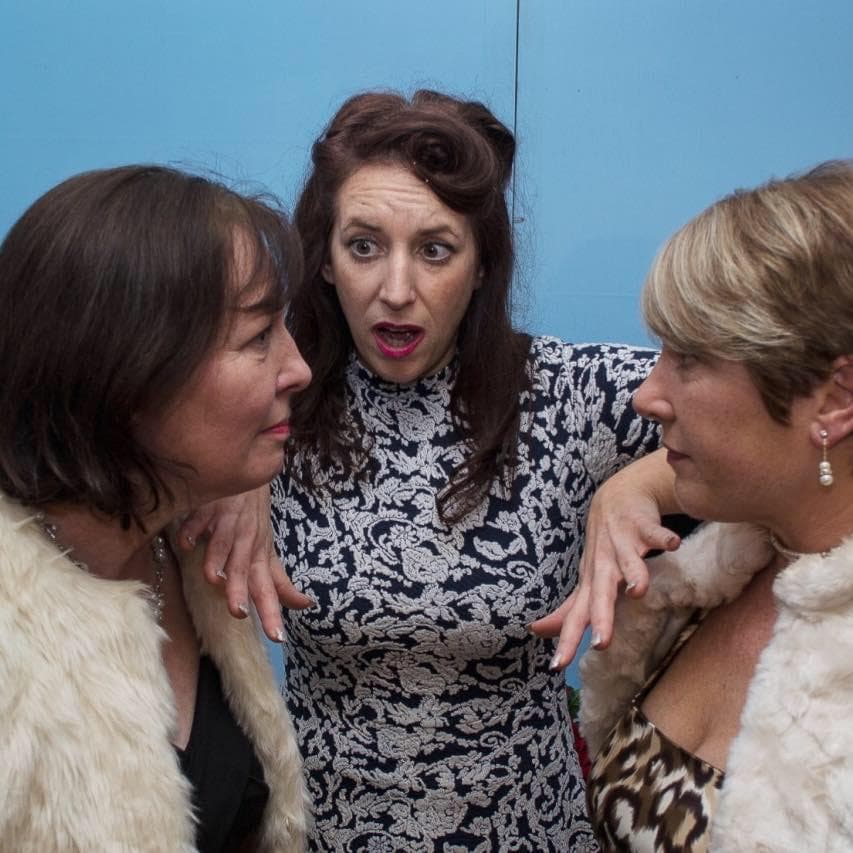 Ardpatrick is home to the talented Hillside Players, a local drama group who put on performances in January and February each year.

Ballylanders Pattern festival takes place for a week in August, celebrating the Catholic feast day of Our Lady on August 15th. Combining sports, children’s entertainment and a vintage car rally you can also witness old-style craft demonstrations, from butter making to threshing, sheep shearing by hand to wattle fence making. A pure slice of nostalgia!

In This Day Out